More and Bigger — The Walking Dead Season 11 On The Way

The Walking Dead Season 11 Will Be Bigger 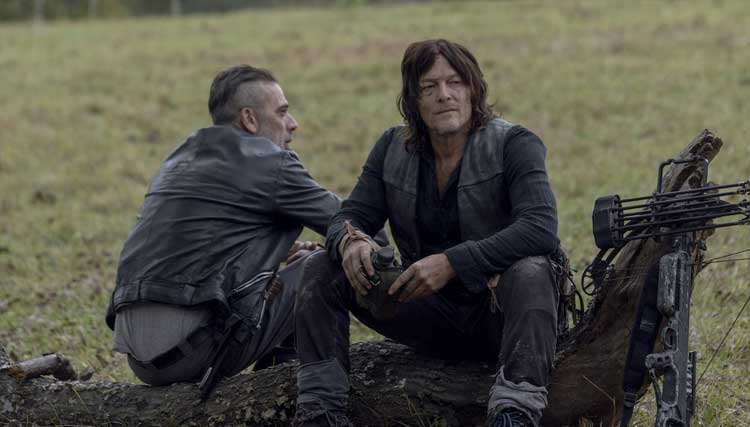 While fans are salivating over the new bonus episodes of The Walking Dead that begin airing next week, it’s just the beginning of what’s to come.

The show’s showrunner, Angela Kang, announced that Season 11, which already had been revealed to contain more episodes than usual, will also contain the big scenes that fans are accustomed to.

According to Comicbook.com, the bigger episodes are a response to the pared-down bonus episodes that were shot during the height of the pandemic. Although the content promises to have some story nuggets for fans, the six episodes will be a little different than what people may expect.

You see, these episodes were the first filmed with COVID-19 health and safety protocols, in place on a pandemic-proofed set that spent most of 2020 shuttered by the virus.

When last we saw our favorites from The Walking Dead, the war with the Whisperers was ending and Maggie had just made her way back to her once home. The battle during the episode was one of the biggest of the series.

However, because the protocols limited the number of cast and social distancing measures were in place for much of it, this sort of scene is not to be expected in the six episodes that begin Feb. 28.

“We got a mobile lab, we clean everything different ways, we have protocols in terms of testing and how close people can be to each other. So we started with episodes where people are in smaller groups, and fewer locations,” Kang said during The Walking Dead Extended Season 10 Preview Special. “We shot everything on our backlot except one location which was just down the street.”

“It was a little surreal because we had a lot of PPE, personal protective equipment, on pretty much at all times. The crew members couldn’t be closer than ten feet to us, so there was kind of this strange invisible bubble around you,” said Seth Gilliam, whose Father Gabriel and Aaron (Ross Marquand) cross paths with guest star Robert Patrick in the episode, “One More.” “As I walked, people would be backing up, backing away, trying to keep the ten-foot distance, so that was a little strange.”

During the special, Kang also promised that The Walking Dead would return for Season 11 with the type of large-scale scenes that the show has been infamous for. She credits the time spent on the six bonus episodes with helping everyone figure out exactly what needed to be done in a responsible way. Stay tuned for what’s sure to be an incredible ending of the mothership show.

This post has affiliate links, which means we may earn advertising money if you buy something. We have to inform you for legal reasons.