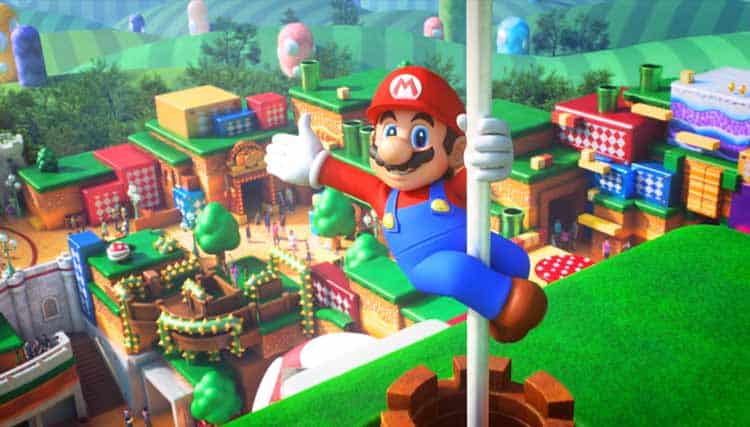 With the coronavirus still lingering almost a year, theme park goers have had to find other ways to fulfill their favorite pastime. Theme parks have remained closed, but construction has continued for expansions at parks worldwide. In the U.S., Avengers Campus continues its construction at the Disneyland Resort. In Japan, the much-anticipated Super Nintendo World at Universal Studios is close to completion. The images looks amazing. Like almost looking at an old Mario Bros. game come to life.

Thank to some aerial images posted on social media and themeparX, we can get a glimpse of the nearly completed Super Nintendo World and how it’ll look like. You can see that it’s mostly based on what seems to look like older Mario games. Here’s a few from earlier this year.

Video footage captured by Twitter user @29QuP2 shows a detailed look on how amazing Super Nintendo World is going to be.

Get a first look at Koopa’s Challenge. A Mario Kart ride that takes riders inside Bowser’s Castle. According to Polygon, the ride uses “AR headsets.” The ride will begin in Bowser’s Castle, but will race through lava world and the famous Rainbow Road.

According to Bloomberg reporter Kurumi Mori, “the kart is definitely on rails,” but that “riders are given some control” to collect items and throw shells — like in the video game.

Other features like restaurants and shopping area will also have Mario Bros. theme food.

The Super Nintendo World expansion reportedly cost nearly $600 million to build. It’s not a theme park on its own, but a separate land within the existing Universal Studios in Osaka, Japan. It was intended to open along side the Olympic Games in Osaka.

Check out Godzilla zip lining at Nijigen no Mori. A theme park located on an island close to Kobe, Japan.

This post has affiliate links, which means we may earn advertising money if you buy something. This doesn’t cost you anything extra, we just have to give you the heads up for legal reasons. Click away!

DC FanDome Reveals You May Have Missed